The care for domestic spaces is something we have experienced in Sardinia. The interiors and the courtyards where we were hosted displayed an articulation of finely handmade objects, significant to the owner. In his house-laboratory (Casa della Canna, in English House of the Cane) in Maracalagonis, Pitano Perra cultivates canes to make the launeddas[1] which he virtuously plays and exchanges with a world of musicians and instrument collectors. The sense of hospitality expressed by him and his friends, including Dante Olianas who made the meeting possible, gave us the sense of a first entry into the island and into a space of inquiry. Hence, a space of suspension to understand each other, beyond the benefit of an enjoyable evening around the table, conversations, music and, eventually, new friends.

A first act of hospitality greeted us right at the threshold – mint leaves were dispersed at the entranceway, releasing their intense and unforgettable scent in a form of a sensorial ritual. Inside, a courtyard encircled by small buildings, filled with a variety of plants interspersed between the island towers of canes. The feast awaited on a long table around which some 12 people found seats. Close by we could enter Pitano’s lab, elegantly distributed and organized. On the upper floors we experienced a living museum of music, where we were warmly invited to touch and test the many instruments coming from disparate corners of the world. At the end of the path, in a room whose walls are covered in white and blue tiles, is the sanctuarium of launeddas, all precisely aligned and organised according to length/sound. Pitano ceonceived this, built it and continues to care for it, despite the fact that his presence in this Casa is precarious and temporary, as the owners can ask him to leave at any time.

This experience reached well beyond and to the centre of the anticipated exchanges of Al Maeishah and Sardinian perspectives. These unravelled stories spanning from domination to belonging, that served to grasp a sense of a shared journey. From Palestine, Italy and UK toward the Netherlands here started the initiation of a brand new process, bloomed from a visit to a land of hospitality, tense arts, the so-called navel of the Mediterranean, doomed significance, wiry and contradictory reactions, yet also a “black hole” revived by people there just for the holidays. A mix of reasons that formed our desire to be there and which gave urgency to the conversations with the people we met there, creating a dialogue/discourse we want to expand.

Similarly, the successive encounters demonstrated a comparable attention to such details where an indoor, extended threshold was always present. Sardinia worked as a crucilble to let ideas emerge and gain their own life. Rossella Dassu, actress and theatre creator, in her house called “Macondo” provided a further connection to the discourse:

“It makes absolute sense to me embodying the paradox of the living room as a sort of counter-State. In Sardinia, but I guess also elsewhere, we are trying to work out who we are with tools that are already obsolete, while still living the complexities of the past, even if this past is a carrier of future tools. A temporal paradox in the limited space. The things we are speaking about, about the past, we are still living now, like we have been always here. We are trying, in the end, to tell about what we are.”

Having Campus in Camps[2] as a starting point of reference, in its drive to enrol and incorporate authentic and contemporary narratives, means we are still addressing the how people talk about themselves, beyond the framework of institutions, patrons or organizations. This was clear also from the perspective of Francesco Puggioni, a designer returned from Barcelona to Alghero, his native town. He came back “because it’s worth trying to make something in Sardinia, in Alghero… I love my town. Or even more than trying.” He added later “but if in time I won’t find anymore forms of connectivity with the place, I will bring this attitude with me somewhere else”, which in some way relates to the meaning of dynamic custodianship. With a group of colleagues, willing to provide the town with a place for gatherings, conversations and production, he founded the cultural association Cabussò (with the baseline “cultural contingencies”) which in the dialect of Alghero means “jump and dive in the sea”, adopting a further social significance in defiance of an arid and shrinking cultural atmosphere.

The shifting image was initially conceived to wave as an ephemeral flag of an imaginary country where to play a different notion of being together. Through critical debates with Paolo Fenocchio, a former civil pilot, living in a large olive grove not far from Cagliari, and inspired by the work of Alfonso Stiglitz, archaeologist and director of the Museum at San Vero Milis, we changed the nature of the flag into its actual manifestation. Fenocchio argued that you are unlikely to challenge the discourse about the State if you don’t change the vocabulary nor its symbols: even by making it a curtain, if you call it flag it will stay a flag, or a counter-flag will keep on referring to its nemesis. Stiglitz, on the other hand, influenced us along this thinking through his remarkable work sometimes unofficially addressed as Gramscian archaeology and the conception of migrant images. The migrant images in particular are

“representations that are not limited to provide us derivative copies of the reality, nor to narrate episodes as chronicles; they also do this and, by using the real and concrete aspects, add a new significance, they work as cultural mediators, narrators that, like a lyric poem in fact, transmit a people’s culture from generation to generation, instructing values and behaviours, developing as such an important pedagogic function.”

Therefore, if the medium is the message, the image can also be its threshold. The shifting image is enacted as a mediating device between the places of departure and the place of arrival. The act of carrying an image of one place into the experience of another will form part of the continuous journey linking every stage of Al Maeishah. Falastin (brought in Sardinia) portraits a view from Wadi Al Qult during a Campus in Camps walk connecting Ramallah to Jericho, where a group of Bedouin tents in the foreground contrasts one of the largest Israeli settlement on the background. The image, printed on a 3×2 meters mesh fabric was finally used as a tablecloth when people gathered with us at our first ghorfat al maeishah in the garden of the San Vero Milis Museum, the 25th August 2017, which was then donated to the Museum. 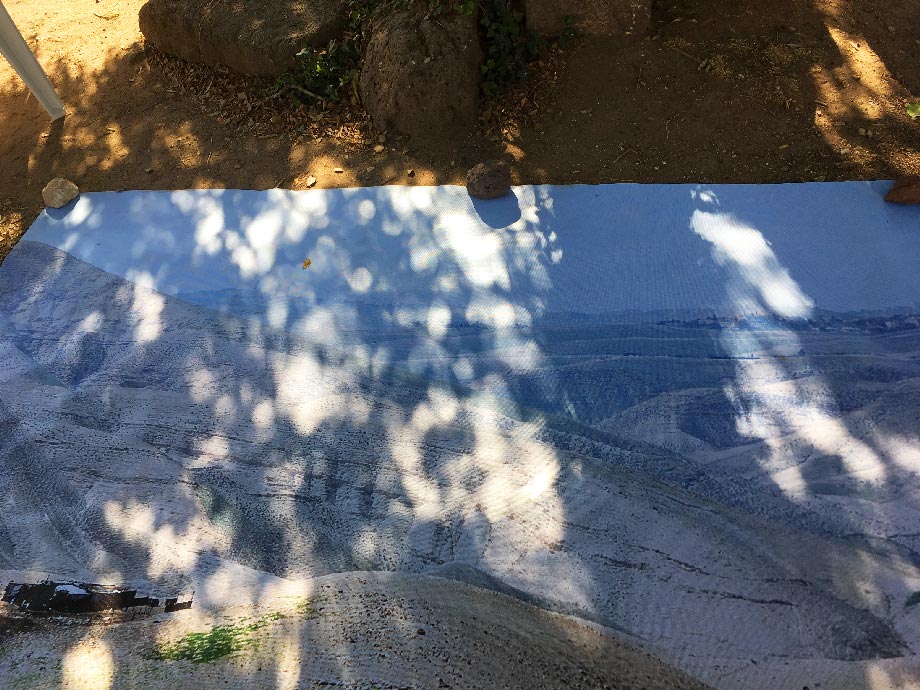 Ichnusa #0 (brought into the Netherlands) contains another story of disruption. While in Sardinia, through an involuntary violation of one of our host’s rules, we experienced the interruption of our stay in his place in Oristano[4]. An episode that immediately provoked a sense of severe reflection, and soon was transformed into learning and broader pondering. As Pelin Tan states:

“…maybe unconditional hospitality is only possible in refugee camps and in tents aggregations, something I refer to as threshold architecture”.

A concept that has been echoed also by Isshaq Al-Barbary, from his direct experience as a refugee from Beit Jebrin camp, in Bethlehem (Palestine), where doors are always open for reciprocal need and walls are frequently climbed and contested, in the face of segregation.

The threshold is a sphere of imagination, invention, exchange and conflict. Staying at the threshold of the paradox can, nevertheless, convey the unfamiliar onto a level of consideration, as much as a living room can be seen as an-other State. The questions are: can the threshold expand and be conceived as a form of journey? Should it be equipped with enough room for a living, althought precarious? Can it be pursued in the unbuilt without being in limbo? Is it an idea, a ritual, a space, a device or a process? Or altogether, resulting as a political agency?

Nederland #1, supported by and played all along the research trajectory Propositions for Non-Fascist Living [6] at BAK – basis voor actuele kunst (Utrecht – NL), is the platform through which Al Maeishah will unravel, reframe, clarify, nurture and expand this route/process.

[1] Luigi Lai mastering launeddas https://youtu.be/ULTi66u4vPk [2] http://www.campusincamps.ps [3] Stiglitz, Alfonso, Immagini migranti. Memorie di viaggio nella Sardegna nuragica, “Medea”, II, 1, 2016, DOI: http://dx.doi.org/10.13125/medea-2408 [4] After an energetic and long day of meetings in Alghero with Cabussò and Spazio T, some two hours away by car, we arrived at our temporary home late at night. The gate was closed and the owner, as we were informed, was still at dinner in town. Hence to get in, almost instantly the wall was scaled and the gate opened, without second thoughts. We did not think of it as a problem, as it was late at night in an isolated and rural outskirts of town. Yet, little did we realise that this was going to be an opening onto new perceptions and paradoxes. That night and the next day were intense moments, as we listened, somewhat shocked at the depth of pain caused due to our lack of reflection on what then seemed a simple harmless act of scaling the wall. This made the owner feel betrayed and his hospitality abused, and in addition worried that we could have been in serious trouble if anyone passing saw us. We exchanged views and stories explaining why we would react differently if someone had acted similarly in our own homes (located around Palestine, Italy, Canada, UK and USA), while fully and humbly accepting his reasons, and knowing how much the place means to him, but also with the recognition that hospitality’s seeming universal codes can also be exceptional. In the end we were invited to leave the place (something we had already considered, as the situation dictated) and stay in friendship. Gifted with a black feather of a rare kind of chicken coming from his livestock. The same livestock, he told us, started with a small group of chickens that initially arrived by climbing over the wall, to then be raised in time through a systematic (and intriguing) way of intensive observations and synergic farming method. [5] During a conversation at BAK – basis voor actuele kunst, Utrecht (NL), 6th and 7th September 2017 at the opening of the research trajectory Propositions for Non-Fascist Living – Propositions #1: What We Mean. More info on Pelin Tan’s discourse on threshold architecture here http://www.decolonizing.ps/site/response-by-pelin-tan/
[6] https://www.bakonline.org/